Life is not to be viewed through the single lens of a diagnosis but to be lived through the Spectrum of potential, promise and purpose.

That’s the motto of Blue Spectrum, a band that covers a wide variety of music and supports individuals who have challenges associated with an autism spectrum disorder.

Zayne Harshaw, a Gahanna resident who was diagnosed with autism at age 4, is the band’s guitarist. READ MORE

The only audience Zayne Harshaw trusted when he started playing the electric guitar was the darkness.

He locked the bedroom door, turned off the lights and for months the then-14-year-old would strum alone, too fearful to let anyone see him working to mimic the music of legendary guitar players. READ MORE

Zayne Harshaw has autism. He also has a passion for music and an incredible talent for playing the guitar. In 2013, he founded the band Blue Spectrum. Since then, he’s been living the dream, playing for people throughout Ohio, across state lines, and hopes to one day use this gift to inspire others around the world.

“Every year, we strive to add a new component to the Creekside Blues & Jazz Festival, that not only freshens the event for fans who attend year to year but also has the potential to expand our audience reach,” said Laurie Jadwin, executive director of Gahanna Convention & Visitors Bureau, also known as Visit Gahanna.

Visit Gahanna serves as the producer of the festival, to be held June 15-17.

“In evaluating what we could add for this year’s festival, we realized that there was an audience that we perhaps were overlooking — our young adults,” Jadwin said. “With that, we are thrilled to introduce our new Music Discovery Stage presented by COTA.”

The stage will be in the Family Fun Zone in Gahanna Veterans Memorial Park, 73 W. Johnstown Road.

On June 15, Cousin Simple, one of central Ohio’s hottest young bands, will take the stage and perform from 7 to 8:30 p.m.

During the day June 16 and 17, the stage will feature a variety of family-oriented, interactive performances, including Jazz4Kids, Endless Recess, the Irwin Academy of Irish Dance and the Gahanna branch of the Columbus Metropolitan Library.

Youth can listen to the music of Blue Spectrum from 7:30 to 9:30 p.m. June 16, featuring guitarist and Gahanna resident Zayne Harshaw.

Harshaw, who was diagnosed with autism at age 4, expressed an interest in playing the guitar as a young teen.

“When I was 13, I loved to play the video game, Guitar Hero,” he said. “I then desired to play the real thing. So I asked my parents for a guitar. I spent the next two years teaching myself how to play. I love to play all types of music, including classic rock, blues, R&B and some pop.”

Harshaw brought his skills to the 2016 Creekside Blues & Jazz Festival when he was invited to sit in with three acts.

The 22-year-old since has traveled as a solo artist and with his band, Blue Spectrum, to Memphis, Tennessee; Harrisburg, Pennsylvania, Rockville, Maryland; San Antonio, Texas; and to cities throughout Ohio.

“My band and I have so much fun playing,” Harshaw said. “We try to get the audience to get up, dance and have a great time.”

He said he wants his hometown to know him.

“I love Gahanna,” Harshaw said. “The festival usually comes around my birthday, which is June 17. I grew up attending the festival with my family. I am really happy about playing the new stage because I have great memories of that park.”

Harshaw said he used to play in the park and ride the rides during the festival.

“I also like the chance to play in front of an audience around my age,” said Harshaw, whose guitar influences include Yngwie Malmsteen, Stevie Ray Vaughan and B.B. King.

Endless Recess will close out the Discovery Stage on June 17, between noon and 4 p.m.

Jadwin said the festival’s musical lineup has grown from blues to blues and jazz, and now includes an eclectic mix that includes rock, bluegrass, country, acoustic, big band and more.

“Our Giant Eagle Family Fun Zone has grown to feature interactive workshops and performances with local musicians that introduce our youngest festival fans to the world of music,” she said.

Given its location in the Family Fun Zone area, there is no charge for attendees to catch the performances of these bands and groups during the weekend.

Children under 12 and members of the military, with their immediate family, presenting military identification are admitted free.

A complete lineup and additional information are available bo going online to creeksidebluesandjazz.com or by calling Visit Gahanna at 614-418-9114.

“Music is a force that can bring people together. Blues music can uniquely cross racial barriers, socio-cultural boundaries, and other hindrances that work to keep people separate because quite simply, anybody can have the blues.” READ MORE 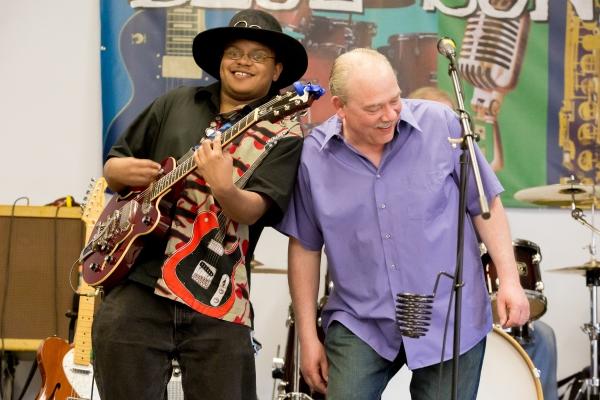 tart with Jimi Hendrix. Add some Yngwie Malmsteen and Tom Morello, with a dash of Slash and a little bit of Kiss and you have blues guitarist Zayne Harshaw.

Ripping out slabs of blues-drenched guitar solos that Buddy Guy or Jimmy Page would be proud of, Harshaw puts his own take on the music he loves.

Harshaw, 19, has five guitars, a multitude of effects and a Fender amplifier. He got interested in playing guitar through playing the video game “Guitar Hero.” He also plays with a band, Blues Spectrum. Harshaw lives in Gahanna, but is booked for several dates this summer at the Square Seven coffee house. He also works at Fairfield Medical Center.

Making Harshaw’s musical feats even more remarkable is the fact that he was diagnosed with autism at age 4.

“At the time it was pretty devastating,” his mother, Gwen Harshaw, said. “They said he would never read, he was in his own world. When he was 14 he used to play ‘Guitar Hero,’ and he loved it. Then he came to us and said, ‘I want the real thing.’ And he never went back. We thought it was nice, but we really didn’t pay attention. For two years, from the time he was 14 to 16, he would go into his room and just play.”

One time during those two years, the family heard Hendrix blasting out of Zayne Harshaw’s room and thought he was listening to the stereo. But he was actually playing the music on his guitar.

“I went upstairs and saw it and couldn’t believe what I was hearing,” Zayne Harshaw’s father, Gene, said.

The family then enrolled him into a guitar class where the instructor discovered he had perfect pitch. That means he can recognize the exact pitch of a note without using a reference note.

Though only 19, Harshaw knows what he wants his future to look like.

“I want to travel around the world and show everybody,” he said. “When I was little my biggest dream was to be playing on the ‘Today’ show, playing in front of people holding signs up. That would be my big dream, including playing in other countries or playing on a cruise ship.”

For the short term, Harshaw wants to add vocals to his musical ability.

“I started singing a few months ago,” he said. “So I’m going to start taking singing lessons so I could try to be a lead singer.”

Besides guitar, Zayne Harshaw also plays the trumpet and bass guitar. He is also a major fan of Kiss and has dressed up as guitarists Ace Frehley and Paul Stanley for Halloween at times.

“I haven’t got a chance to see them, but I know they’ve been traveling a lot,” Zayne Harshaw said.

He also listens to Rage Against the Machine, which is Morello’s band, the Red Hot Chili Peppers and Metallica. He said he also enjoys hanging out at Columbus guitar stores like Guitar Center and Sam Ash.